Solutions for a sustainable future

In an interview for Wider Horizons (2018), Dr. Nick Savidov shared his vision to “replace existing composting technology, which is slow and unsafe, with aerobic bioreactors to treat solid organic waste – including hum an waste – to convert it to liquid fertilizer with no human pathogens for nutrient recycling”. Savidov affirmed that this technology could set the stage not just for more sustainable agriculture, but also for space colonization: “It may sound crazy now, but if you recycle waste, water, nutrients, even carbon dioxide, you can use plants to produce food anywhere.” He added that aquaponics is an ideal solution for places where water is scarce or difficult to access and, in some cases, aquaponic systems using aerobic bioreactors have helped recycle the same water for over a decade.

Savidov, who has used aquaponics and aerobic bioreactors to develop the first fully automated zero-waste aquaponics system that utilizes both liquid and solid waste, described how this approach reproduces the main interaction that occurs in a complete ecosystem in a single integrated solution. One of the biggest problems with conventional hydroponics is that the primary objective of the system is growing plants – a process that can produce significant organic waste. In a closed system, however, that waste could be converted to nutrients by efficiently using aerobic bioreactors and automated control systems. As part of his research, Savidov uses a hybrid solution that deposits the waste sludge to the bioreactor in a continuous manner. Currently, he must stop the process every couple of weeks to decant the solution; however, he is working on developing an in-line aerobic bioreactor that will help avoid stopping the procedure temporarily by unloading the mineralized solution continuously. 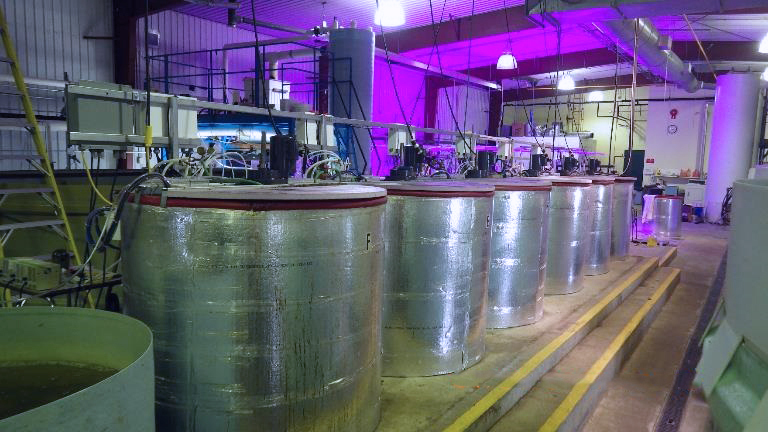 Most aquaponics facilities use unique equipment configurations, proprietary processes and require a broad range of precision control and monitoring capabilities, and Savidov’s lab at Lethbridge College is no exception. As he described it, “If we did not have Argus Controls it would feel like a backyard aquaponics project”. Argus Controls provides the ideal solution for his task as he was able to create a unique commercial prototype in a 1,000 sq. ft. facility. The ability to collect data and the software provided by this controls system are important to his research but, looking forward, he sees the scalability and flexibility of Argus Controls as key to successful commercial operations. An Argus Controls system with the same characteristics as the one used at Lethbridge College could potentially be installed in a larger facility by simply expanding it. 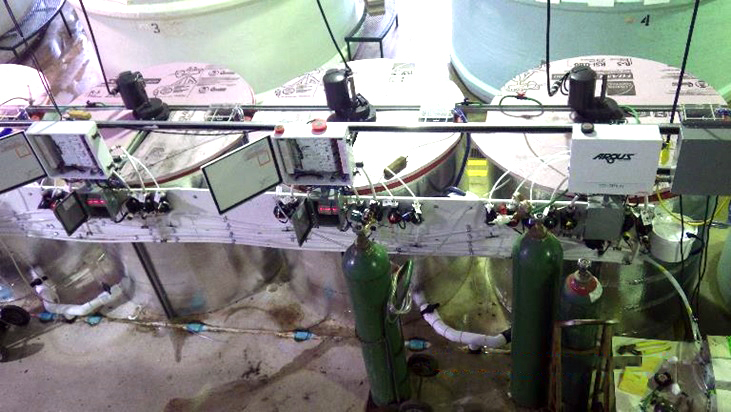 The use of a controls system is essential to ensure the proper leveling of the pH while aiming for a zero-waste aquaponic solutions with the use of aerobic bioreactors, Savidov commented: “You could run a bioreactor without Argus but the pH could go up very fast when you load your system because of ammonium release […] or it could also go down very, very fast and the pH would reach a very low level where most bacteria would die reaching a conservation stage”. He further explained the need for Argus Controls: “Running an aerobic bioreactor creates an isothermal reaction which means that, without proper monitoring, it could go up very quickly within 24 to 48 hours -depending on the load of dry matter-and reach 67oC. This climate condition kills all bacteria essential for this process as pasteurization temperature is reached. If all bacteria are eradicated, the temperature automatically drops and starts increasing again until it gets to 67oC making the climate inside the aerobic bioreactor go up and down several times. This cycling process causes the fermentation process to take weeks. With an automated control system, the temperature is regulated, and this same process concludes in days instead.”

Scientists are striving to find more efficient ways to produce food as climate becomes more unpredictable, environments change and other impediments, such as geography or population growth, affect its supply. Although controlled food production techniques provide an alternative to solve these issues, other aspects such as organic waste generation demand consideration. It is in this context that aquaponics represents a method where animal and vegetable food sources can be produced while minimizing the use of water. If aerobic bioreactors are included in the system, as Savidov has developed, the result is a sustainable food-producing-ecosystem with zero-waste.